A legal action can be brought before a labour court if the matter disputed is covered by the Labour Court Act. In such cases, labour courts have exclusive jurisdiction.

There are two different kinds of labour court procedures, “Urteil” procedures and “Beschluss” procedures. On the one hand they differ in terms of the kind of decision they lead to (“Urteil” or “Beschluss”). On the other hand the procedures follow different rules.

In “Urteil” procedures – like in civil procedures in general – it is the responsibility of the parties to provide the court with the information and the evidence needed to make a decision (principle of party presentation).

In “Beschluss” procedures, it is generally the responsibility of the court to establish the facts of the case (principle of official investigation).

Labour court “Urteil” procedures are used in disputes between employees and employers arising from an existent employment relationship, its conclusion or its termination.

Especially the following areas are of practical significance:

The “Beschluss” procedure is the procedure chosen for matters concerning the Works Constitution Act, the Senior Management Representatives Committee Act and different Workers’ Participation Acts. With regards to works constitution law these disputes often concern the existence and scope of works council participation rights and the employer’s responsibility to meet the expenses of works council activities.

At the Federal Labour Court (final instance) the panels (“Senate”) are made up of three professional judges – one of them the presiding judge – and two lay judges representing the employers‘ and employees‘ sides respectively. 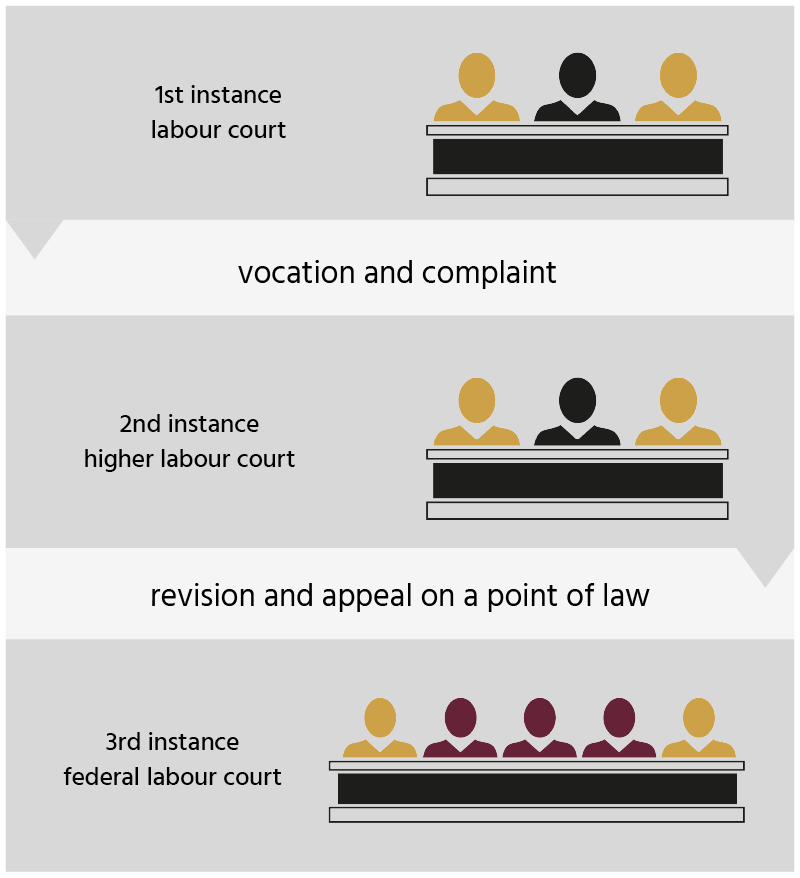 In „Urteil“ procedures at labour courts of first instance (“Arbeitsgerichte”) there will be a conciliation hearing in front of the Presiding Judge of the panel without the lay judges just a few weeks after the lawsuit has been filed. It is the aim of the conciliation hearing to settle the case without a court hearing. The conciliation hearing is also used to speed up the procedure. If a settlement cannot be reached, a court hearing in front of the full panel will be prepared. Nevertheless, labour courts are bound to work towards an amicable arrangement at any time during the proceedings. If a judgment has to be passed, the voting right of the lay judges equals the voting right of the Presiding Judge.

The unsuccessful party (both parties could be partially unsuccessful) can lodge an appeal (“Berufung”) against the labour court’s judgment with the relevant higher labour court (“Landesarbeitsgericht”), if the lower court has granted leave to appeal in its judgment. The appeal shall be allowed if the case is of fundamental legal importance. Additionally, appeal can be lodged if the value of the cause of appeal exceeds 600 Euro or if the claim relates to the existence, non-existence or termination of an employment relationship.

A “Beschluss” procedure appeal (“Beschwerde”) against rulings made by a labour court of first instance is heard by the relevant higher labour court without further requirements.

At appeal, the case is reheard by the higher court both on points of law and the facts of the case, which means that – some reservations notwithstanding –  fresh facts can be submitted by the parties. Under certain conditions, appeals on points of law can be lodged against higher labour court judgments. These appeals, as well as judicial review applications in the case of higher labour court “Beschluss” procedures, are heard by the Federal Labour Court.

Appeal on points of law

Leave to appeal on points of law

At labour courts of first instance the parties may either appear on their own behalf, or be represented by a lawyer, a representative of an employer’s association or a trade union or any other authorised person.